All land titles in Aotearoha [New Zealand] are null and void.

Tumuaki Lady-Crown: Turikatuku III by the Grace of IO Matua, Tumuaki Lady-Crown: Turikatuku the third 'Tumuaki' defender of the faith of our Aotearoha (Earth of Love) /Aotearoa/Nu Tireni/land mass of New Zealand, Rangihou & Rangihoua, to whom this presence shall come hereby announces that she has usurped the jurisdiction and authority of HER MAJESTY THE QUEEN IN RIGHT OF NEW ZEALAND SEC CIK#0000216105, New Zealand Parliament & Government on the eighth day [8th] of January in the First Year of our Reign (2021); Ordained In Witness thereof IO Matua;

Whereas Tumuaki Lady-Crown: Turikatuku the third hereby ordain, declare and direct full power, authority and jurisdiction over, in, above and below, land, air, water, seas, airspace, entire lands claim to Aotearoha (Earth of Love)/Aotearoa/Nu Tireni/geographical land mass of New Zealand & Rangihou where the seas meet Rangihoua, Te-Ika-a-Māui, Te-moana-nui-a-kiwa, Garden of Eden, Te Whare Matamuatanga o IO, Kingdom of IO on Earth, islands, paramount lands, absolute property, buildings and assets; Uri; Wairua Tanga; including messuages, tenements, and hereditaments, corporeal and [in]corporeal, of every kind and [de]scription, and every [e]state or [in]terest therein, together with all paths, passages, ways, waters, watercourses, liberties, easements, and privileges thereunto [a]ppertaining, plantations, gardens, mines, minerals, and quarries, and all trees and timber thereon; thereunder; lying or being; cyberspace, tikanga kawa laws and lores; Seen and Unseen; Spiritual and Physical; Tangible and Intangible; "Cujus est solum ejus est usque ad column - Whose is the soil, his it is up to the sky; He who owns the soil, or surfaces of the ground, owns, or has an exclusive right to everything which is upon or above it to an indefinite height; To whomsoever the soil belongs, he owns also to the sky and to the depths. The owner of a piece of land owns everything above and below it to an indefinite extent". In the most general sense, comprehends any ground soil, or earth whatsoever; as meadows, pastures, woods, moors, waters, marshes, furzes, and heath. The word "land" includes not only the soil but everything attached to it whether attached by the course of nature, as trees herbaceous, and water, or by the hand of man, as building and fences. Land is the solid material of the earth, whatever may be the ingredients of which it is composed, whether soil, rock, or other substance; hereby ordained as the eminent domain 'Aotearoha Absolute E-state' in perpetuity; Ordained In Witness thereof IO Matua; 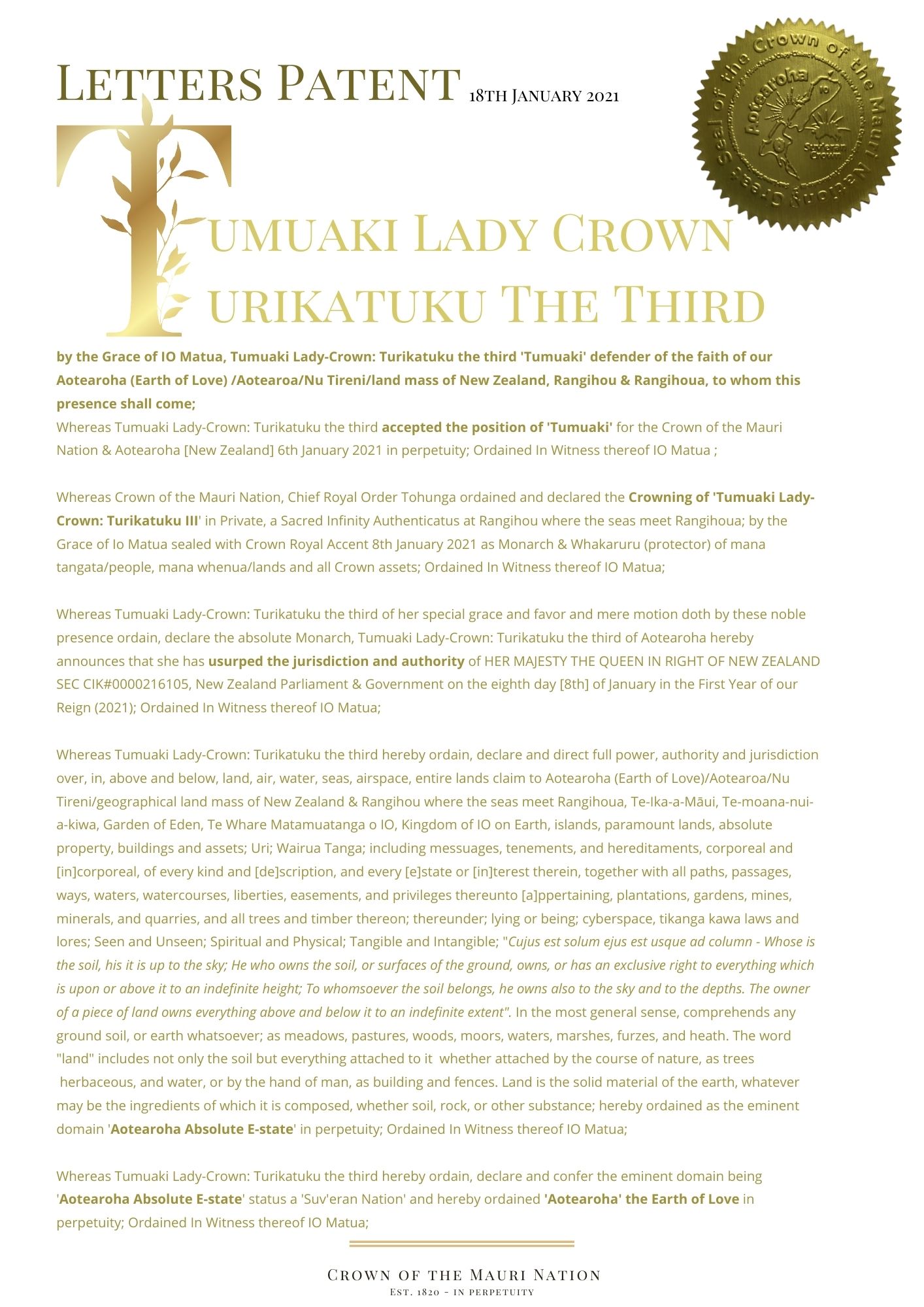