The Crown of the Mauri Nation are standing as one, united on our Sacred Lands.

CROWN OF THE MAURI NATION – Only successor to Te Tiriti o Waitangi 1840 as Crown of England vacated 1986.  All common-wealth charters and live life claimants are native/half-castes as the Crown of the Mauri Nation are the 50/50 Partner to the only common-wealth treaty. Qualified by Section 11 of the Native [Dis]tricts [Re]gulations Act 1858.

CROWN – Suv’eran & Royal governing power and government of a country that has a king or queen (Monarch).

OF – used as a function word to indicate origin or derivation.

THE - used when referring to a particular individual or thing.

We are independent Charters of Suv’eran Free Peoples, qualified by the Royal Decree Proclamation Judgment and
Treaty of Universal Charters Trust 2021.
We have evolved and are collective in unity, love, kindness and peace, respectfully rising up and having brought forth our lores.

We are the mighty, the strong, the courageous, the mystic and the open-minded suv'erans, universally connected.

The Crown of the Mauri Nation has restored what rightfully belongs to us all in its most purest, natural and organic form. We are spiritual, natural and not of the same blend as those corporations and incorporations who have corrupted and distorted the minds and spirit of our brothers and sisters.

The Crown of the Mauri Nation cordially, respectfully and humbly invite you to come aboard,
protected by the korowai of IO Matua Kore.

In unity, our light will shine, in its most brightest form.

You have the Power & Authority!
The Crown of the Mauri Nation Administration are in service to You! 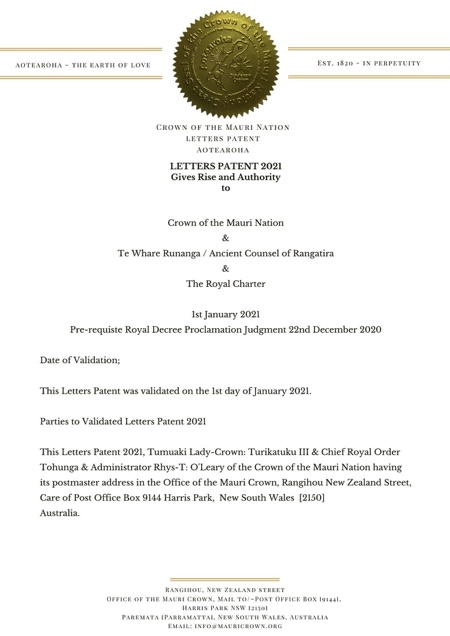 By Letters Patent enacted by the Crown of the Mauri Nation, we reign in perpetuity as the Crown on the earth plane and extend the provisions of our actions and authority to administer our Justice and Lore/Law in Aotearoha [New Zealand] as the
Mauri Crown Paremata [Parliament] & Te Whare Runanga [Government] thereof and for other purposes enacted from time to time issued with the
'Great Seal of the Crown of the Mauri Nation'
to exercise powers hereby vested in Us to erect the said islands of Aotearoha/Aotearoa/Nu Tireni [geographic Land Mass of New Zealand]
North Island/South Island/Stewart Island/Islands annexed to Aotearoha [New Zealand/Norfolk Island and Gondwanaland [Australia]
and to make all such laws, ordinances, instructions as we see fit;

On 11th December 2020 CE, HM Queen Elizabeth Royal Regent Gregory Baughen qualified that the Crown of England Vacated Te Tiriti o Waitangi 1840 CE (The Treaty). On 22nd December 2020 CE the New Zealand Prime Minister, New Zealand Secretary to the Governor General/HM Queen Elizabeth Royal Regent and the New Zealand Treasury Solicitor received via special hand delivery our Royal Decree Proclamation Judgment.  On the 11th February 2021 CE the Treaty of Universal Charters Trust 2021 CE was ratified by 29 independent charters (suv’eran nations) who have now fulfilled the accession and assembly criteria, with many others having expressed a willingness to do so.

Under the authority granted to me by the founding suv’eran charters standing under our Treaty of Universal Charters Trust 2021 CE, the final presentment was dispatched to Queen Elizabeth II at Buckingham Palace by her Royal Regent Gregory Baughen by special hand delivery on 12 January 2021 CE, in acknowledgement of the acquiescence of Her Majesty’s New Zealand Government to the terms, aims and objectives of the Royal Decree Proclamation Judgment 2020 and now the Treaty of Universal Charters Trust 2021, as well as its implicit recognition of the independence, suv’eranty and jurisdiction established by its ratification, under the well established principles of the Law of Nations.

Crown of the Mauri Nation Suv'eranty is a Fact and this is how it was done;

That is an Action of the Crown of the Mauri Nation.  It was qualified by the Royal Decree Proclamation Judgment 13th November 2020 when the suv'eran mauri nation hand-delivered the Decree, which today stands in law, unrebutted, qualified by the Final Orders 12th January 2021 & Treaty of Universal Charters Trust 2021.

Pursuant to the terms of the Treaty of Universal Charters Trust 2021, which were publicly declared, witnessed and ratified for and on behalf of the free native & tribal suv'eran peoples of the islands of Nu Tireni, New Zealand, Aotearoa, Aotearoha, Rangihou and Gondwanaland on 11th February 2021, a copy of which is now sent on HM Queen Elizabeth Royal Regent Gregory Baughen and New Zealand Government by special delivery.

The entire Law Society of Private Unincorporated Foundations are the Rangatira, Law makers!

Acknowledging the absence of any possibility of a legal objection by Her Majesty’s New Zealand Government to the proclaimed rights of any native and tribal suv'eran peoples to independence, self-determination and self-governance, wherever our ancestral lands may be, in accordance with the generally established principles of inter-national law and convention, including [without limitation] the Vienna Convention 1961 on the Law of Treaties 1969 and the Convention on the Rights of Indigenous Peoples 2007, by which Her Majesty’s New Zealand Government has agreed to be bound.

In consideration of the fact that it is well established under the principles laid down in Book II, Chapter 1, Article 6 of the Law of Nations, that all nations (charters) will assist each other in the perfection of other chartes, whether in the event that any indigenous peoples declaring their right to independence, self-determination and self-governance or otherwise.

Wherefore, the following points set forth the mutual understanding that has arisen by the tacit agreement of the parties: Inherent native authority of our body, property, children, resources and land!

Be it know that Real Estate is not land, it is only the air and assets above it.  Corporations (dead entities) cannot own land.  It is secured with Letters Patent & our Treaty (Land Patent).

"Fiction yields to truth. Where truth is, fiction of law does not exist" 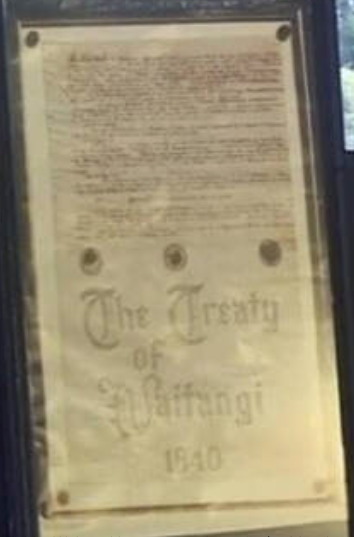 Te Tiriti o Waitangi is a treaty written in the Maori language which is made from pre-European to dog skin. It is the only treaty witnessing three Soveriegn seals.  There is the seal of Queen Victoria on behalf of the Crown of England the seal of Waikato Tairea on behalf of the Crown of the Maori Nation and a seal by Governor Hobson on behalf of the Colonial Government of New Zealand. The treaty was sent to England after 1840 with the Seal fo Taiapuru Waikato Tairea including the signature of Governor Hobson and the signature of the witness to Governor H.R.H Queen Victoria, the treaty was returned to Aotearoa via the Flagship "Herald". The treaty now contained Queen Victoria's Seal.  The treaty was presented to Waikato Tairea at Mahia on the East Coast under three consecutive twenty one gun salute by the "Herald" and its accompanying ships the "Penguin" and the "Alligator". This completed the partnership of the Tiriti of Waitangi at Sovereign Level.

Click here to watch the Video & Audio of Secretary to Governor General stating that the Crown of England have vacated Te Tiriti o Waitangi 1840 a generation ago: Video Link

Listen to the recorded audio of Gregory Baughan, Secretary to the Governor General of New Zealand discussing how the Crown of England have vacated New Zealand.
Click here to watch the Video & Audio: Video Link

The Crown of England vacated 1986 validated by Gregory Baughen, Secretary to the Governor General in a direct recorded conversation. They are no longer here.  The only successor is the Crown of the [Maori] Mauri Nation.

What does this mean?

The Crown of England vacated 1986 validated by Gregory Baughen, Secretary to the Governor General in a direct recorded conversation. They are no longer here.  The only successor is the Crown of the [Maori] Mauri Nation.

By Letters Patent enacted by us 20th December 2020 we reign in perpetuity and extend the provisions of our [a]ctions to provide for the Administration of Justice and Lore/Law in Aotearoha[New Zealand] and for the more effectual Te Whare Runanga[Government] thereof and for other purposes enacted from time to time issued under the Great-Seal of the 'Crown-of-the-Mauri-Nation' to exercise powers hereby vested in Us to erect the said islands of Aotearoha[New Zealand] North Island/South Island/Stewart Island/Islands annexured to Aotearoha[New Zealand/Norfolk Island/Christmas Island/Cocos Island and Gondwanna[Australia] and to make all such laws, ordinances, instructions as we see fit;

The Crown of the Māuri Nation are mobilized throughout the entire lands of Aotearoha bringing forth the true power and glory of God on the Earth/Te-Whare-Matamuatanga-o-IO as may be required for peace, order and good government;

We stand as living men and women, standing in our private capacity on our paramount lands, in our Charters & Kin-doms/Matamuatanga, having returned from sea to manage our affairs & all the tenants/pakeha living on our lands as ratified in He-Whakaputanga-o-te-rangatiratanga-o-nu-tireni/~1835, Te Tiriti o Waitangi 1840 & verified within the Queen-Victoria-Statement [de]livered by: Lord-Normanby/~1839 & Queen-Victoria: Letter/-1858.

We direct all Fake Crown-of-England-[a]gents are no longer welcome on our lands;

We assert/direct to the world/global-[un]it[ed]-nations that the Mauri-crown Te-Whare-Runanga/Ancient-counsel-of-Rangatira[government] is standing with full power, authority and lores/laws to manage our affairs to remit fines, penalties or forteitures for crimes committed against the Crown of the Mauri Nation.

Our Services and Foundations

Our Sovereign Governance Structure
and Constitution

We can assist with transitioning your business into a private foundation.

We can administer your Live Life Claims
as a private sovereign.